Making the Most of the Lame Duck 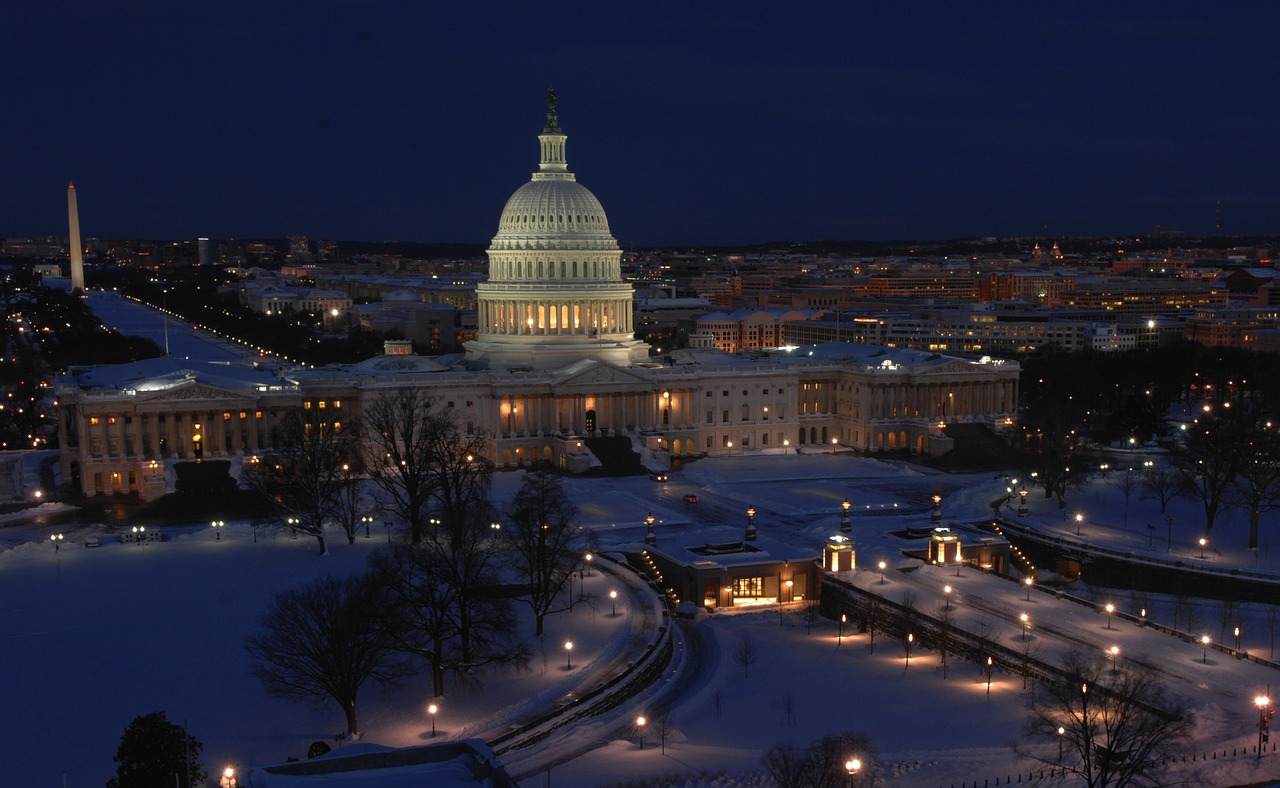 It’s official: the next Congress will be a divided one. While Democrats held their Senate majority, Republicans narrowly took control of the House of Representatives Some Republicans have already made clear they will investigate the Biden administration, even as Senate Republican Minority Leader Mitch McConnell has signaled there could be room for centrist policymaking “between the 40 yard lines.”

But Democrats still have control for another month, and there is critical business to get done in this lame duck Congress. The New Center identified four areas in particular that demand action now.

Why it matters: Donald Trump’s baseless objections to the 2020 election, and the January 6th riots, demonstrated that current law is not clear enough to ensure a peaceful transfer of presidential power. The 135-year-old Electoral Count Act (ECA), which is supposed to govern the post-election period, has ambiguous language that then-President Trump used to claim (wrongly) that the Vice President and Congress could reject electoral vote slates from the states. It’s not clear that these schemes would have held up in court, but the mere threat was alarming enough to warrant reform.

State of play: Republican Senator Susan Collins proposed the Electoral Count Reform Act (ECRA) in July 2022. The bill has 15 other Republican co-sponsors including Mitch McConnell, and it has even more support among Democratic senators. The ECRA has not yet been voted on. In September, the House passed a similar bill— the Presidential Election Reform Act (PERA) — with the help of only nine Republicans.

Key provisions of the ECRA include:

The House’s PERA has some differences with the ECRA. For example, PERA would require one third of both chambers (instead of one fifth) to support an objection in order for the objection to be heard. PERA is also more specific about what qualifies as a “failed election,” in which a severe emergency prevents the election from fully occurring, and how states should respond by extending the voting period. The differences are not insignificant, but the House and Senate should be able to reach compromise.

Why now: The Senate’s ECRA already enjoys the support of a filibuster proof majority, and the House has passed its own bill. But with Republicans assuming control of the House in January, an Electoral Count reform likely wouldn’t even be able to come up for a vote before the 2024 presidential election. The time is now.

Stand Up To Russia and Stand With Ukraine

Why it matters: Ukrainian officials have made it clear that to sustain their war effort against Russia’s unlawful invasion, Ukraine requires economic aid in addition to military aid. Since the war broke out, the U.S. has been the largest supplier of weapons and financial aid to Ukraine, offering upwards of $65 billion in overall assistance this year. But Ukraine is still estimated to need $38 billion just in direct economic support in 2023. If the U.S. suspends or scales down its aid, European nations concerned with the regional energy crisis could follow suit. According to Taras Kachka, Ukraine’s Deputy Minister of Economic Development, “Without this financial support, our public finances would collapse. And it means that this is immediate victory for Russia.”

Beyond the moral imperative to support Ukrainians, Congress should also consider the global implications of a potential Ukrainian economic collapse. The Washington Post’s Josh Rogin explains it would “exacerbate the energy crisis, the food crisis, the refugee crisis and the global economic slowdown.” Extensive U.S. aid also signals to authoritarian leaders our high resolve on issues of democracy and territorial integrity. If it appears the U.S. is abandoning these principles, it risks emboldening dangerous leaders like Chinese President Xi Jinping and North Korea’s Kim Jong-Un.

State of play: Providing aid to Ukraine previously elicited significant bipartisan support, but recent polling, midterm campaign messages, and statements by some Republican members and leaders have signaled a growing partisan divide. In May, Congress approved a $40 billion military and humanitarian aid package, with just 57 House and 11 Senate Republicans in opposition. But now reports are surfacing that a growing number of Republicans are seeking to cut economic assistance. Others are also calling for increased federal oversight of funding and demanding more support from large NATO allies.

A November poll by the Wall Street Journal captured this shift among Republicans. While 81% of Democrats and 45% of Independents support sending additional financial aid to Ukraine, just 35% of Republicans agreed.

The Biden administration and Democratic leaders have sought to reassure Ukraine of their commitment amid a series of mixed messages in the media. With a Republican House next Congress, the White House is seeking to secure funding during the current lame duck session. On November 15, the White House requested $37.7 billion for Ukraine from Congress including $21.7 billion in military support and $14.5 billion in direct economic assistance and humanitarian aid. If this doesn’t get approved, Speaker Pelosi has indicated Democrats may try to include an aid package in the must-pass government funding bill.

Why now: Ongoing support for Ukraine funding isn’t guaranteed from House progressives either. In October, 30 House progressives signed a letter to President Biden urging him to “pair the military and economic support the United States has provided to Ukraine with a proactive diplomatic push” for a negotiated end to the conflict. While they later retracted the letter after backlash, if aid isn’t approved during the lame duck, House Republicans could band together with these progressives to block, delay, or add harmful contingencies to funding.

Why it matters: The federal debt ceiling is a statutory cap on how much the U.S. Treasury is authorized to borrow to fund government operations. This may sound like it has something to do with enforcing fiscal responsibility, but extending the debt limit simply authorizes the Treasury to finance the deficit that Congress has already incurred — it does not represent new debt. In practice, the debt ceiling has become a partisan football that either party can use to shut down the federal government and/or ruin the country’s financial reputation. Threatening to not extend the debt ceiling is a tactic that both parties have used to force political concessions from the president, putting the country’s well-being at risk.

State of play: The debt ceiling was raised to $31.3 trillion in December 2021. As of this month, the Committee for a Responsible Federal Budget estimates that the ceiling will be reached around July 2023. Republican leaders have already indicated that they would be seeking reforms to Social Security and Medicare along with broader spending cuts during debt ceiling negotiations.

Treasury Secretary Janet Yellen recently urged Congress to raise the debt ceiling to a point where it wouldn’t be met until after the 2024 presidential election. In the past, Yellen has also supported ending the debt ceiling altogether — which would put the U.S. on par with most other developed nations. White House officials don’t believe they can convince the 10 Republican senators needed to support a bill to raise the ceiling during the lame duck. They will attempt to bypass Republicans and raise the ceiling through the budget reconciliation process, but only if they can convince Democratic holdout Joe Manchin.

Why now: By the time the debt ceiling needs to be raised again, Republicans will control the House. In 2011, a House Republican threat to not extend the ceiling caused Standard & Poor to downgrade the U.S. government’s credit rating for the first time, from a perfect AAA to AA+. It also sparked the stock market’s most volatile week since the 2008 recession. Today, with record inflation and an economy struggling to recover from the pandemic, Congress cannot keep playing games with America’s credit.

Why it matters: America’s federal energy permitting process is highly inefficient, time consuming, and expensive. Processes for public input mandated by the 1970 National Environmental Protection Act (NEPA) and the lengthy litigation that often results means it is not unusual in the U.S. for a project’s permitting to take significantly longer than the time it takes to actually build the infrastructure. Today, the average environmental review process takes 4.5 years. Delays drive up a project’s financing costs, create prolonged inefficiencies, and signal a failure of government to provide necessary public goods.

If the Biden administration wants the renewable energy projects funded in the Inflation Reduction Act (IRA) to come to fruition sooner rather than later, Congress will have to agree on suitable energy permitting reforms. They are also needed to bolster U.S. energy and natural resource security at a time of immense global uncertainty.

State of play: This summer, Senate Majority Leader Chuck Schumer promised West Virginia Senator Joe Manchin a vote on permitting reform in exchange for Manchin’s vote on President Biden’s IRA. But when Manchin tried to include his Energy Independence and Security Act in October’s must-pass continuing resolution, bipartisan opposition that threatened a government shutdown forced him to back down and remove the provisions before the vote.

Republicans were resentful of the IRA’s passage and Democrats’ political maneuvering, but their subsequent support for West Virginia Republican Senator Shelley Moore Capito’s permitting reform bill (which hasn’t been voted on) indicates they want reforms. Progressive Democrats were wary of upsetting their environmentalist constituents and refused to greenlight the Mountain Valley Pipeline. But others from both sides of the aisle recognize the need for reform, particularly for advancing clean energy goals, and the potential for compromise.

Why now: Updating America’s aging infrastructure, ensuring the availability of reliable and affordable energy, and advancing our transition to cleaner fuel sources is far too important to be sidelined by political revenge tactics and optics concerns. If Democrats want to ensure clean energy is prioritized in permitting reforms and that NEPA’s core tenants are preserved, they should get this done before the next Congress.

Some of these issues, like permitting reforms, have a chance of passing in the next Congress, but likely with less bipartisan support than they could receive now. Others, like ECA reform, have almost no chance of passing a Republican House. Either way, time is running out in Washington. The 117th Congress should use the lame duck period as an opportunity to showcase bipartisanship at this time of high political tension.