Why Is Everyone in College Sports Getting Rich Except the Athletes? 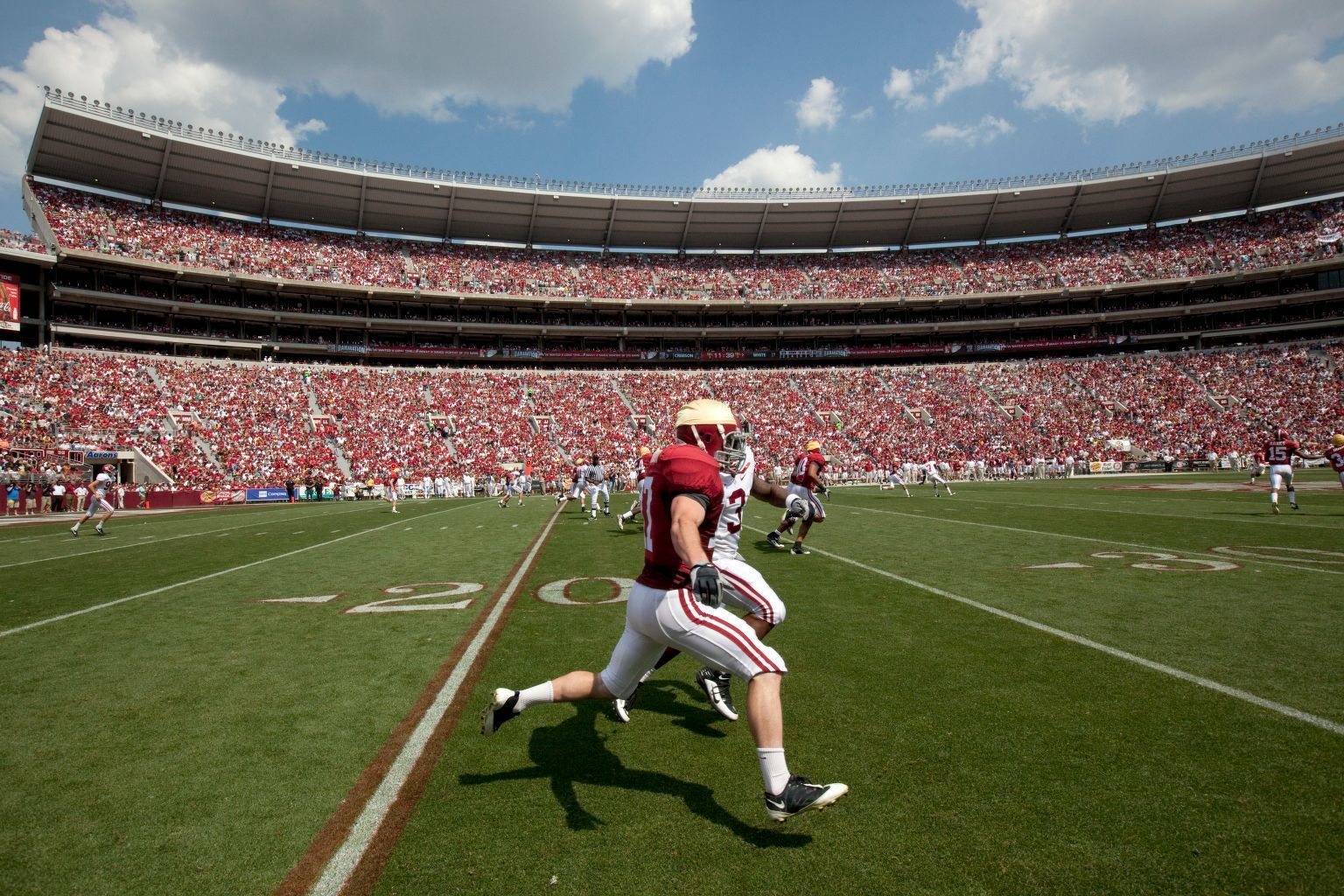 The average annual salary of a Division I college football coach is $2.67 million.

And the salary of Mark Emmert, the president of National Collegiate Athletic Association (NCAA), was $3.9 million in 2018.

Meanwhile, a few years ago, a football player for the University of Central Florida lost his scholarship because he made some side money from his YouTube account.

Americans have been aware of this inequity between the people who run college sports and the kids who actually play them for years. But now, amid a pandemic that’s potentially putting college athletes at risk and renewed attention to broader issues of social justice, the NCAA’s stance that there should be a “clear line of demarcation between college athletics and professional sports” is looking increasingly untenable.

As former Duke basketball player and current ESPN analyst Jay Bilas explained to The Washington Post, NCAA amateurism rules raise important questions about fairness and economic opportunity: “What other college student is told what they can or cannot accept by virtue of what they do? Imagine if schools said, ‘Listen, we just gave you a scholarship to study chemistry. But you can’t go out and invent the best super glue and make money off it.’ Or if they told a music scholarship student, ‘You can’t go cut a record or perform in Radio City Music Hall.’ It would be ludicrous if they said that. Nobody would tolerate it.”

Bilas and other reformers have recently argued colleges should be permitted to pay their athletes (above and beyond what they receive for scholarships and room and board). How such a system could work is the subject of intense debate.

But what about the question of whether an athlete can benefit financially from the use of their name, image, or likeness? That’s a much more straightforward issue and one that the U.S. Congress could resolve in relatively short order. In this issue brief, The New Center explains the history of the debate and what we might expect from Congress in the coming months.

Hey, Is That Me in That Video Game?!

In 2014, the NCAA suspended University of Georgia star running back Todd Gurley and required him to complete 40 hours of community service for accepting over $3,000 for his autograph. He’d violated the NCAA’s longstanding amateurism rule, which prohibits student-athletes from using their name, image, or likeness to earn money.

The name, image, and likeness debate grabbed national headlines as early as 2009 when former UCLA basketball player Ed O’Bannon discovered that an unnamed UCLA player with his jersey number, height, weight, skin tone, and distinctive left-handed shot was featured in the video game NCAA Basketball 09 without his permission. O’Bannon filed a class action lawsuit against the NCAA, the video game company Electronic Arts, and the Collegiate Licensing Company on behalf of NCAA Division I basketball and football players, arguing that the use of players’ likenesses for commercial purposes without consent violates those players’ rights to publicity under the Sherman Antitrust Act. In 2013, Electronic Arts and the Collegiate Licensing Company settled with the plaintiffs for $40 million. In 2014, a federal district court ruled that NCAA amateurism rules were in violation of antitrust laws, but that allowing colleges to offer scholarships up to the full cost of tuition was a sufficient remedy. While O’Bannon won the case, the victory did not result in substantial policy change. Both the NCAA and O’Bannon petitioned the Supreme Court to hear the case, but both were denied, leaving the issue unresolved.

Federal lawmakers have taken notice of the growing inequities in college sports. Senator Chris Murphy (D-CT) told USA Today, “These are largely African-American players that are being kept poor in order to enrich white athletic directors, coaches and sports company executives. But there’s also a free market element to this discussion. There’s no other marketplace in the country in which the people providing the labor should be compensated millions of dollars and are instead being given no [pay]. So if you’re a free market Republican it’s hard to defend this system, and if you’re a civil rights Democrat it’s hard to defend this system.”

In March 2019, Rep. Mark Walker (R-NC) introduced the Student-Athlete Equity Act, which would amend the tax code to exclude any organization that restricts a student-athlete’s rights to profit from their name, image, or likeness from being tax-exempt. The bill has eight cosponsors—five Democrats and three Republicans—but it has not been revisited since being referred to the Ways and Means Committee upon its introduction.

In September 2019, however, California catalyzed new federal momentum on the issue with its passage of the Fair Pay to Play Act, set to take effect in 2023, which would make it the first state to prevent universities from denying their student-athletes the opportunity to profit from their name, image, or likeness. Since the passage of the California bill, several other states have introduced similar bills. In June 2020, Florida passed the Intercollegiate Athlete Compensation and Rights Bill, which is nearly identical to California’s law, but would take effect earlier, in July 2021.

In response to the patchwork of state laws in various stages of the legislative process, the Power 5 NCAA conferences have called for Congress to enact legislation to create uniformity across the country. They released a draft of a proposed federal bill called the Student-Athlete Equity Act of 2020, which would permit Division I athletes to profit from their name, image, and likeness, but it is much narrower in scope than the laws enacted at the state level, with the following guardrails:

The NCAA released a proposal nearly identical to the Power 5 proposal, but it also included a ten-year sunset provision. Former Stanford football player and current senator Cory Booker (D-NJ) denounced both proposals in a July 2020 Senate Judiciary Committee Hearing: “The proposals are too restrictive to actually benefit college athletes. Let’s be very clear: they’re not reform. It’s symbolism and not substance.” ESPN’s Jay Bilas had a similar reaction, telling USA Today, “I don’t see any significant movement towards players having actual rights here. What (the NCAA) really means is ‘severely limited and regulated’ (changes) with very little consequence and benefit to the players.”

Were the NCAA to receive a federal antitrust exemption, it would be permitted to engage in otherwise anticompetitive business practices without the possibility of challenges in court. For example, the NCAA could keep its restrictive name, image, and likeness rules without any threat of new lawsuits like O’Bannon v. NCAA. The four major professional sports leagues—Major League Baseball (MLB), the National Football League (NFL), the National Basketball Association (NBA), and the National Hockey League (NHL)—all enjoy some degree of antitrust protection, but these protections do not extend to player employment issues. Antitrust exemption for the NCAA is overwhelmingly opposed in Congress.

Earlier this year, Senators Marco Rubio (R-FL), Mitt Romney (R-UT), Chris Murphy (D-CT), David Perdue (R-GA), and Cory Booker (D-NJ) announced the formation of a bipartisan working group on the issue of student-athlete compensation. While there is growing agreement among congressional Democrats and Republicans that name, image, and likeness legislation is necessary, disagreements have arisen with respect to just how broad such a law should be. No federal name, image, and likeness bills introduced since the passage of California’s law have received bipartisan support.

Following a July 2020 Senate Commerce Committee hearing, members of the committee are expected to introduce at least one bipartisan bill on the issue. Senators Jerry Moran (R-KS) and Richard Blumenthal (D-CT) are collaborating on legislation and Committee Chairman Roger Wicker (R-MS) is also drafting a bill of his own. In January 2021, the NCAA is expected to vote on a new internal policy—which will likely be similar to what they proposed to Congress—but internal policy would not supersede state law without federal legislation.

With Florida’s name, image, and likeness law set to go into effect in July 2021, Congress now has an unofficial deadline to do something, as a patchwork of state laws could upend the competitive balance in college sports. As former Ohio State football player and current congressman Anthony Gonzalez (R-OH) told the Associated Press, “it doesn’t make a whole lot of sense to have a high school student looking at different state legislatures and saying ‘I like Florida’s law better than Oklahoma’s law, so maybe I’ll go to the University of Miami.’ If you get into a federal standard, you clean that up for the athletes, you make it simpler. It levels the field for all of college sports so no matter what state you’re in, you play by the same rules, which in theory means you have equal opportunity inside of that.”