In recent days, President Biden has drawn ire from progressive activists for his cautious approach to student loan forgiveness and his plan to end the two-year pause on student loan repayments. Congresswoman Ayanna Pressley went so far as accusing Biden of “policy violence” during a slew of tweets demanding total student debt cancelation. The administration has now extended the repayment pause until May, but the President’s initial instinct was right: with historic rates of federal spending and inflation, it is time for Washington to start making prudent choices. Rejecting blanket student loan forgiveness should be an easy choice given most of the benefits of this policy would go to well-off borrowers who do not need the help.

In 2020, the debt-to-GDP ratio in the United States hit its highest point since World War II. Today, the debt is still equal to 98% of the GDP. To make matters worse, inflation is at a 40-year high. Blanket student loan forgiveness would represent a new, significant fiscal burden. According to the Brookings Institution, canceling all federal student loans would cost $1.6 trillion. Canceling $50,000 per borrower, which Senators Elizabeth Warren and Chuck Schumer have proposed, would cost $1 trillion. These are massive expenditures that would dwarf twenty years worth of funding for other social support programs, as illustrated by the following chart from the Brookings Institution.

But the price tag alone is not what makes blanket student loan forgiveness problematic. Most people with student loans have a college degree and, unsurprisingly, are better off than the average American. The poorest 40% of households owe less than 20% of the student loan debt, and they make only 10% of all student debt payments. Additionally, a majority of the debt is held by people with postgraduate degrees, who earn significantly more than their less-credentialed peers. If Senators Warren and Schumer got their way, the poorest 60% of households would receive only a third of the benefits, as shown by the chart below. The rest would be concentrated among higher earners. 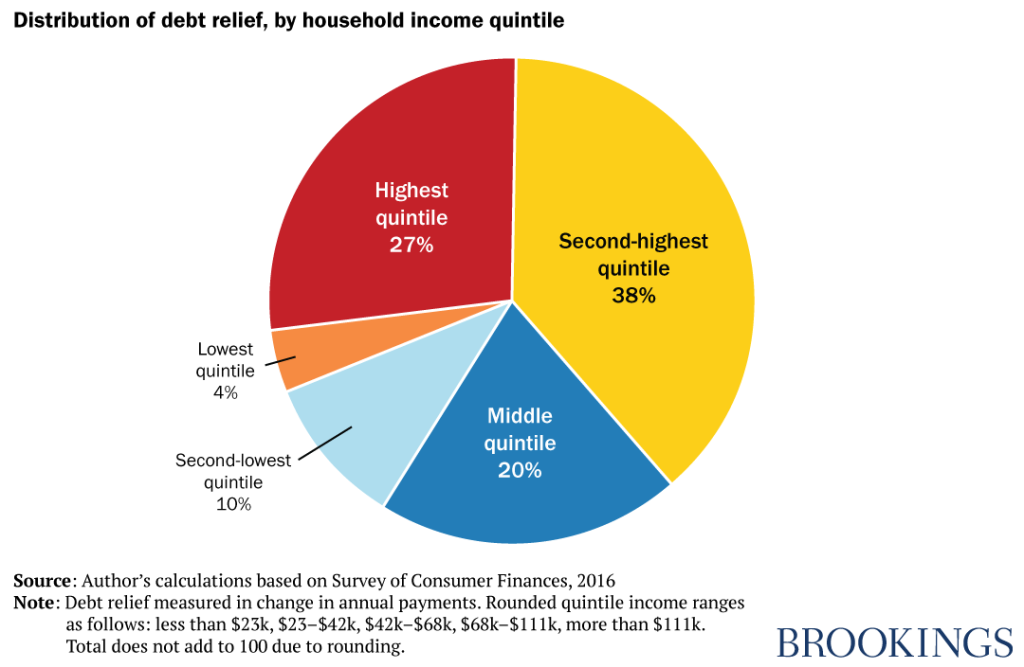 If there is to be any student loan forgiveness, it should be targeted at those who need it the most. Biden and leaders at the Department of Education are pursuing plans to do just that. The Department’s negotiated-rulemaking committee proposed forgiveness for certain cases, such as people with severe disabilities. This is a relatively small expenditure—roughly $6 billion for around 320,000 borrowers—that would ease the burden for people unable to work. The administration has also proposed a new, more progressive income-based repayment plan in which borrowers would pay a capped percentage of their income toward their loans, with graduated rates for higher earners.

Total student loan forgiveness is too expensive and regressive. The administration should resist left-wing pressure and continue the more responsible policy of targeted student loan support.